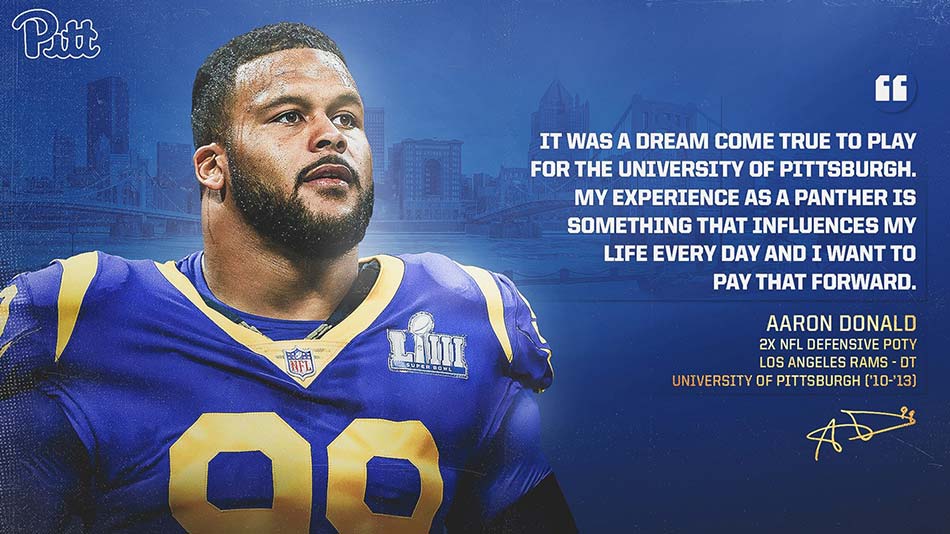 PITTSBURGH – Before Aaron Donald was a perennial All-Pro defensive tackle for the Los Angeles Rams, he dominated the college ranks as an All-America performer at the University of Pittsburgh.

The two-time reigning NFL Defensive Player of the Year readily credits the impact Pitt had on preparing him for pro football. Now, thanks to a historic gift, Donald will impact the development of those Panthers who follow in his footsteps.

The University announced today that Donald has made a seven-figure financial commitment to the Pitt Football Championship Fund, which serves the program in such key areas as facility improvement, recruiting, technology and student-athlete development. At 27 years of age, Donald is the youngest seven-figure donor in the history of the University of Pittsburgh. It also marks the largest donation ever by a Pitt football letterman to the program.

"It was a dream come true to play for the University of Pittsburgh," said Donald, who starred at Pitt from 2010-13. "My experience as a Panther is something that influences my life every day and I want to pay that forward. I believe in what Coach Narduzzi is building at Pitt and this was an opportunity for me to make a difference for our current and future players. Pitt will always be my school and I'm honored to be able to support the Blue and Gold."

"Aaron's favorite saying is 'Hard work pays off,' and his incredible success is certainly a testament to that motto," Director of Athletics Heather Lyke said. "The wonderful thing about Aaron is how he shares his success with others. Even while playing for the Los Angeles Rams, he remains passionately invested in both Pitt and Pittsburgh. The work he puts in daily at Pitt shows our student-athletes the commitment necessary to succeed at the next level. Aaron's gift to Pitt football truly comes from the heart and we are tremendously grateful for his generous commitment to our football program's future. As a player and person, Aaron Donald continues to set the highest of standards of what it means to be a Panther."

"Aaron Donald is a legendary football player but he's also a legendary human being," Pitt head coach Pat Narduzzi said. "Aaron is the toast of Los Angeles but he's still a Pitt and Penn Hills guy at heart. He's humble, hardworking and has never forgotten where he came from. This incredible gift to Pitt is a reflection of that. On behalf of our entire program, I want to thank Aaron for his generous investment in the future of Pitt football. We will work hard every day as coaches and players to make you proud, Aaron."

A Western Pennsylvania native, Donald starred at Penn Hills High School, twice earning first team All-State Class AAAA, before matriculating to Pitt in 2010. He was an immediate contributor for the Panthers and over the next four seasons compiled an amazing 66 tackles for loss, still the most by an FBS interior defensive lineman (and fourth regardless of position) since 2000 when the NCAA began tracking that statistic.

As a senior in 2013, Donald was an unstoppable force despite facing an array of blocking schemes designed to slow him down. He led the nation with 28.5 tackles for loss and added 11 sacks, four forced fumbles and a blocked extra point. At season's end, Donald was named a unanimous first team All-American and the winner of the Bronko Nagurski Trophy, Chuck Bednarik Award, Outland Trophy and Rotary Lombardi Award, making him one of the most decorated players in Pitt history.

During the Rams' drive to the Super Bowl this past season, Donald led the NFL with 20.5 sacks, the most in a season by an interior defensive lineman in NFL history. He additionally paced the NFL in tackles for loss (25) and quarterback hits (41).

Donald has been named first team All-Pro four consecutive seasons (2015-18). This past year, he was a unanimous selection, receiving all 50 panelist votes at the defensive tackle position.

Reflecting his lofty status in the NFL, Donald played a memorable role in the league's "The 100-Year Game" commercial that aired during this year's Super Bowl telecast.