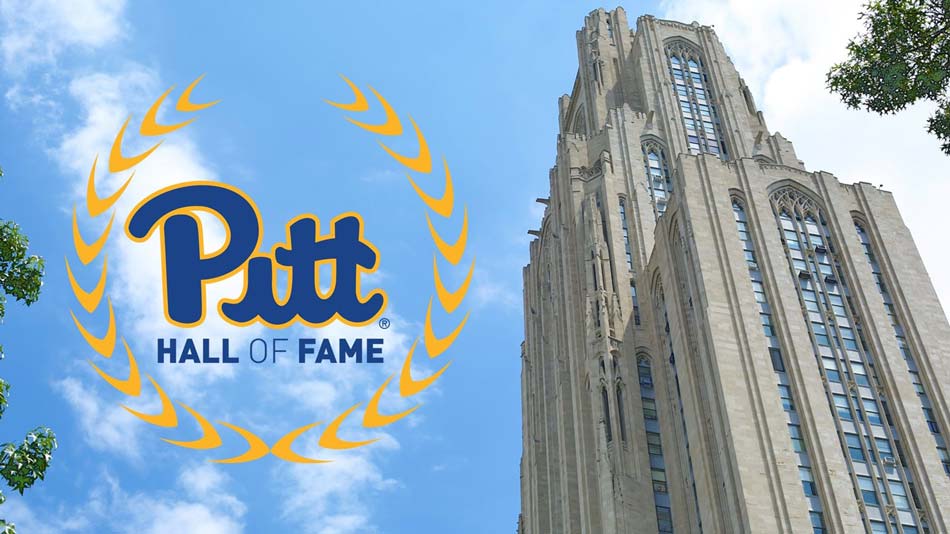 "It is a tremendous thrill to announce our latest Pitt Athletics Hall of Fame class," Lyke said. "We have an inspiring tradition of excellence at Pitt and our 2019 inductees are an outstanding reflection of that. They set lofty standards of excellence which continue to inspire and motivate us today. We look forward to celebrating this group's extraordinary achievements at our induction ceremony on September 20th."

Lyke additionally announced that Panthers basketball great Billy Knight has been named to the newly created position of Chairman of the Pitt Athletics Hall of Fame. Knight, who starred for the Panthers from 1971-74, was a member of Pitt's inaugural Hall of Fame class last year.

"Billy reflects the very best of Pitt, not only as a former All-America basketball player but also as an exceptionally accomplished alum and professional," Lyke said. "His insight and passion for Pitt will be great assets for all facets of the Pitt Athletics Hall of Fame."

Listed in alphabetical order, these are the members of the 2019 Pitt Athletics Hall of Fame class.

Nominations for the Pitt Athletics Hall of Fame were solicited from the general public this spring. Candidates had to be five years removed from their final year of collegiate competition and not currently be playing professional sports.

An 18-member selection committee then evaluated the candidate pool and provided a recommendation on the class to the director of athletics.

The 2019 class will receive induction at the Pitt Hall of Fame Dinner on Friday, Sept. 20, at the Petersen Events Center. On Saturday, Sept. 21, the inductees will be introduced at Heinz Field when the Panthers host UCF. For Hall of Fame Dinner ticket information, contact Executive Director for Signature Events and Donor Experience Allison Rubin by phone (412-648-0345) or email (arubin@athletics.pitt.edu).

One of the city of Pittsburgh's greatest athletes, Clancy was a four-year starter at Pitt from 1977-81, averaging 14.4 points and 11.6 rebounds per game. He is the only Pitt player to score more than 1,000 points (1,671) and grab over 1,000 rebounds (1,362) during his career. Clancy was a three-time Eastern 8 All-League selection. He led Pitt to four winning seasons, the 1981 Eastern 8 Tournament championship, an NIT berth in 1980 and an NCAA bid in 1981. Clancy was additionally a member of the U.S. Gold Medal team at the 1979 Pan American Games under coach Bobby Knight. He went on to be drafted by the NBA's Phoenix Suns in 1981 and the NFL's Seattle Seahawks in 1982, the latter occurring even though he never played collegiate football. Clancy played one season of professional basketball in the Continental Basketball Association (averaging 11.5 points and 8.3 rebounds for the Billings Volcanos) before playing 12 seasons of professional football. He was a member of the Seahawks and then returned to Pittsburgh to play for the Maulers of the United States Football League. He later played for the USFL's Memphis Showboats before returning to the NFL as an impact defensive end for the Cleveland Browns and Indianapolis Colts.

Covert was a fixture on Pitt's punishing offensive fronts from 1980-82, surrendering just three sacks during that span. His senior season he did not give up a single sack the entire year. Covert was a two-time first team All-American, earning consensus status as a senior. In his three years as a starting offensive tackle, Pitt went a combined 31-5, finishing in the nation's Top 10 each season. The 1980 and 1981 teams each went 11-1 and finished as high as No. 2 in the national polls. Covert was chosen in the first round of the 1983 NFL Draft (sixth overall) by the Chicago Bears and was a consensus All-Rookie pick. During his eight seasons in Chicago (1983-90), his lengthy list of individual accolades included: All-Pro status four times, two first-team All-NFL selections, two Pro Bowl invitations and two selections as the NFL Offensive Lineman of the Year (1985 and 1986). With Covert as a spearhead, the Bears led the NFL in rushing four consecutive seasons (1983-86). He was a vital cog for Chicago's famed 1985 team that went 15-1 and routed the New England Patriots, 46-10, in Super Bowl XX. Covert was named to the Bears All-Time Team as well as the NFL's All-Decade Team of the 1980s. He was elected into the College Football Hall of Fame in 2003. His No. 75 jersey is retired by Pitt.

Fletcher stands as one of the most decorated athletes in the history of the University of Pittsburgh, regardless of sport or era. Starring at Pitt from 1992-96, she earned 14 first-team All-America citations and was a six-time Big East champion. Fletcher became the first woman in Pitt history to win an individual NCAA track and field title when she captured the 1995 indoor triple jump. In 1996, she added the NCAA indoor high jump championship. Also an accomplished student, Fletcher was named the 1996 Big East Scholar-Athlete of the Year. Fletcher competed for her native Guyana at the 1992 Olympics in Barcelona. She also is an accomplished musician who toured internationally before arriving at Pitt.

Hennon is one of the most prolific scorers in the history of Pitt basketball. During his three-year varsity career (1956-59)—played three decades before the 3-point shot was instituted—he averaged an exceptional 24.2 points per game. His 1,814 career points stood as the Pitt record for 19 years. Hennon still holds Pitt's single-game scoring record (45 points), a mark he achieved in an 87-84 double-overtime win over Duke in 1957. He twice led Pitt to the NCAA Tournament (1957 and 1958) and was twice honored as an All-American (1958 and 1959). He received enshrinement in the Helms Athletic Foundation Basketball Hall of Fame in 1970. He was the first basketball player to have his jersey number (10) retired by the University of Pittsburgh, receiving that honor in 1968. Hennon was drafted by the NBA's Cincinnati Royals but chose to enter medical school at Pitt and became a surgeon.

Heon set new standards of greatness for Pitt swimming during her remarkable career that spanned from 1981-85. She was an 11-time All-American, earning national accolades in each season of her collegiate career. Heon independently earned honors in the 400 individual medley (three times), 500 freestyle (twice), 1650 freestyle (twice) and the 200 backstroke. She also was part of three All-America relay teams (twice as a member of the 800 free relay and once in the 400 medley relay). Heon was a nine-time individual Big East champion and two-time relay champion. At the conclusion of her Pitt career, Heon held seven different school records.

She represented the United States at the 1984 Summer Olympics in Los Angeles, finishing fourth in the 400 individual medley.

Hyatt is one of Pitt basketball's greatest players who starred during one of the program's most successful periods. During his three seasons (1927-30) playing under legendary coach Doc Carlson, Hyatt led the Panthers to a combined 60-7 record while earning All-America stature each year. He scored a then-exceptional 880 points as a collegian. The Helms Foundation twice declared Pitt national champions during his career: 1927-28 following a 21-0 season and 1929-30 after the Panthers posted a 23-2 mark. In Hyatt's final season, he led the nation with a 12.6 scoring average and was named the Helms Foundation Player of the Year. Hyatt is enshrined in the Helms Athletic Foundation Basketball Hall of Fame and also was elected to the Naismith Memorial Basketball Hall of Fame in 1959.

Johnson is the all-time career scoring leader in Pitt basketball history—male and female—with 2,312 points. Playing in 113 games at Pitt from 1987-91, she averaged 20.5 points per contest. She also grabbed 908 career rebounds, ranking eighth in Pitt women's basketball annals. Johnson holds the school record for points in a game, a 45-point outburst against Kent State in 1990. Her 266 total field goals during the 1988-89 season also remains a Pitt standard. Johnson was a three-time All-Big East honoree (1989-91), including two first-team nods. She was the first women's basketball player to have her jersey number (24) retired by the University of Pittsburgh, receiving that honor this past January.

Majors, who coached the Panthers from 1973-76 and again from 1993-96, will forever be remembered as the architect of Pitt's ninth football national title. In four years, Majors transformed Pitt from a 1-10 outfit in 1972 to an undefeated national champion in 1976. Majors' first recruiting class–which included tailback Tony Dorsett–would be the foundation for the Panthers' resurrection. His first season on the Pitt sideline witnessed a 6-5-1 mark and Fiesta Bowl berth, the Panthers' first postseason invite in 17 years. In 1975, Pitt went 8-4, climaxing the campaign with a 33-19 victory over Kansas in the Sun Bowl. The rebuilding job was now complete, setting the stage for the triumphant 1976 season. Pitt steamrolled through all 12 of its opponents, including a 31-10 thumping of Notre Dame in the opener, a 24-7 rout of Penn State in the regular-season finale, and a 27-3 demolition of Georgia in the Sugar Bowl. Majors finished his 29-year coaching career (which included tenures at Tennessee and Iowa State) with 185 victories and 16 bowl invitations.

An impenetrable offensive tackle, May was an instrumental part of Pitt's four-year record of 39-8-1—including four bowl games and three Top 10 finishes—from 1977-80. In his junior and senior seasons, both 11-1 Pitt teams, May did not allow a single sack. He enjoyed a decorated final campaign, earning unanimous All-America status and the prestigious Outland Trophy, presented to the nation's top interior lineman. Selected by the Washington Redskins in the first round (20th overall) of the 1981 NFL Draft, May was a standout member of the team's "Hogs" offensive line from 1981-90. He was vital to three Washington Super Bowl berths (1982, 1983 and 1987), including championships in '82 and '87. He finished his pro career with the San Diego Chargers (1991) and Arizona Cardinals (1992-93). May was elected into the College Football Hall of Fame in 2005. His No. 73 jersey is retired by Pitt.

A highly regarded prep football prospect, McRae went on to become one of the Panthers' most accomplished track athletes from 1984-88. He earned seven first-team All-America citations and four NCAA titles. McRae won three consecutive NCAA indoor national championships (1986-88) in the 55 meters and also won the 1986 NCAA outdoor national championship in the 100 meters. He was a four-time indoor All-American in the 55 meters and three-time outdoor All-American (twice in the 100 meters and once in the 200 meters). He also claimed the gold medal in the 100 meters at the 1987 Pan American Games. In 1986, he broke Carl Lewis' 55-meter indoor world record by finishing in 6.00 seconds. In 1987, McRae set NCAA and American records in the 60-meter dash, clocking at 6.50.

The hardnosed Schmidt earned the highest of accolades at both the collegiate and professional levels. A linebacker for the Panthers from 1950-52, he overcame an array of injuries to become a first team All-American his senior year. In the NFL, Schmidt would become the era's prototype for linebacker play—instinctive, aggressive and smart. He played in 10 Pro Bowls and was a 10-time All-Pro during his 13-year career (1953-65) with the Detroit Lions. He led the Lions to two NFL championships (1953 and 1957). Schmidt would later serve as the Lions' head coach from 1967-72. He was elected into the Pro Football Hall of Fame in 1973 and College Football Hall of Fame in 2000. His No. 65 jersey is retired by Pitt.

Ed was a three-time national champion and three-time All-American from 1955-57 at 123 pounds. He won EIWA crowns at 123 and 130 pounds and was voted Outstanding Wrestler at the Eastern Tournament in 1957. Ed finished his career at Pitt with a record of 51-1 and was an alternate on the 1956 Olympic team.

Hugh was a three-time national champion and three-time All-American from 1952-54 at 115 pounds. He claimed the 1954 EIWA title at 123 pounds. He finished his career at Pitt with a record of 56-1. Hugh additionally won a gold medal at the 1951 Pan-American Games and was a member of the U.S. team at the 1952 Olympic Games.